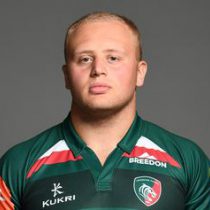 Betts joined Leicester in the summer of 2016 and played for the Tigers three times in the 2018 season as well as featuring twice in 2017.

He then continued his development with a month at the University of Sydney before heading back to Welford Road.

Betts has had plenty of experience despite having his best years ahead of him.

The Irishman played for Munster at Youth, Under-19 and Under-20 levels and also represented his country at Under-19s and Under-20s age grade, reaching the final of the World Junior Championship in Manchester during the summer of 2016.

After joining Tigers later that summer, he played National League rugby with Loughborough Students and has used that level to gain valuable game time.

In April 2018, the tight-head prop signed for Ealing Trailfinders.