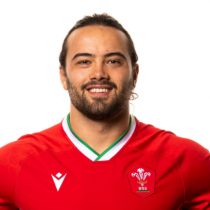 A product of Crymych RFC Macleod’s physical presence made a mark in the region’s age-grade sides before making his way to the senior side.

Josh scored two tries in his four appearances for Llanelli RFC and making one appearance for the Scarlets, he was called into the Wales U20 team and celebrated a historic Grand Slam with his country.

Macleod’s hard work in 2015-16, in what was a frustrating season with injuries, came to fruition the next season as he went on to make 17 regional appearances.

In May 2017, he was rewarded with a new contract at the West Wales region ahead of the Pro 12 semi-final.

Macleod has enjoyed a breakthrough season for the Scarlets, including a European Rugby Champions Cup start against champions Saracens, and has won plaudits for his presence in the loose and physical ability over the ball.

In October 2020, he was named as one of seven uncapped players in Wales' 38-man squad for the 2020 autumn campaign.