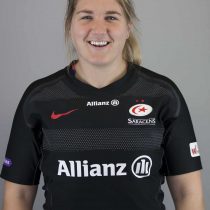 Poppy Cleall plays at Saracens alongside twin sister, Bryony, who was awarded an EPS agreement at the same time Poppy earned a full-time England contract in January 2019.

Poppy started playing at an after-school club when she was six and went on to Ellingham & Ringwood RFC with brief spells at Salisbury and Wimborne.

Norwich-born Poppy attended Burgate School and Sixth Form Centre in Hampshire, studied sports therapy and rehab at the University of West of England in Bristol.

Having made her England debut in the 2016 Six Nations, she featured in every match for England’s 2017 Grand Slam winning side and was a late call-up at the Women's Rugby World Cup squad that year where she played three times.

In 2018 Cleall continued her rise and showcased her versatility – starting all five games in the Six Nations and scoring three tries as she switched her time between blindside flanker, No 8 and second row. She also featured in all five of the 2019 Women’s Six Nations, scoring four tries, as England went onto win a Grand Slam.

She was named the Six Nations Player of the Championship in 2021, and had 47 caps for her country as well as 105 for Saracens Women.

In August 2021, she signed a new deal to remain at Saracens after being at the club for 9 seasons.