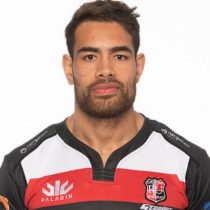 Born in Motoʻotua, Potu Junior Leavasa is a powerful forward and represented Auckland Rugby and Hamilton Marist at youth level.

In 2015 he moved to Melbourne in Australia. The Samoan was part of the Melbourne Rebels academy and received his first call for the Samoan U20 national team.

After a stint in the United Kingdom with the Southend Saxons, Leavasa returned to Australia where he represented Warringah Rugby jersey in the Shute Shield.

He would then represent the emerging Samoan side featuring in 2018 and again in 2019 in the World Rugby Pacific Challenge.

During the 2019/20 season he featured in the MLR for Austin Gilgronis before playing in the Mitre 10 Cup for Counties Manukau.