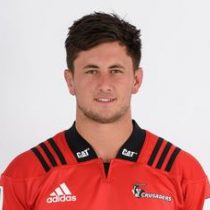 Strange was raised in the rural community of Collingwood and attended high school at Nelson College during which time he captained their rugby first XV.

He was selected to represent New Zealand for the 2016 World Rugby Under 20 Championship.

Strange was named in the Tasman Makos squad for the 2016 Mitre 10 Cup aged just 19 and instantly established himself as a first-team regular, making 11 appearances, 10 of which were from the start and bagging 2 tries as the Nelson-based outfit finished runners up in that season's Premiership and was handed a Super Rugby contract by the Crusaders ahead of the 2017 Super Rugby season.

Having yet to make his Super Rugby debut, Strange was named in the Provincial Barbarians side to face the British & Irish Lions in their tour opener in Whangarei on June 3.

Strange was coached by his former New Zealand Under-20 coach Scott Robertson who was in his debut season with the Crusaders having formerly coached Canterbury.

In May 2017, he was withdrawn from the Provincial Barbarians squad in order to fulfill his Super Rugby commitments.

Ahead of the 2020 Super Rugby season, Strange has been selected for the Crusaders squad. He has obtained 25 caps and will be looking to add to this total.

He went into the 2020 Mitre 10 Cup season having made 38 appearances for Tasman Makos.

In February 2021, he signed a new deal with the Crusaders until the 2023 season.