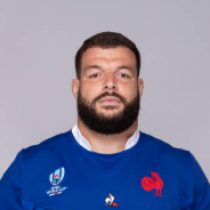 Slimani has made his name as an incredibly versatile prop in recent years, capable of playing on both sides of the scrum.

Having begun his career at local side AAS Sarcelles, he was picked up by Stade Francais to join the underage set up. graduating from the academy in 2008, Slimani has since become a regular in the side, regularly anchoring the scrum.

Made his debut for Stade Francais in the TOP14 fixture at Clermont on 1st Nov 2008 aged 19, won TOP14 final against same opponents 2015. Finalist in Stade Francais' Challenge Cup loss to Leinster in Dublin in May 2013.

In 2013 his strong club performances were noticed by the national side, making his France international debut in 2013, in a loss to New Zealand.

His first 8 caps all came as a replacement before making a first start against the Wallabies in Melbourne summer 2014.

Started four of France's five games at RWC2015 and scored his first two test tries in successive matches, against Italy at Twickenham and Canada at Milton Keynes.

Slimani was included in the France squad for the three-match series against South Africa in June 2017, ahead of the series the talented tighthead has represented France 36 times.

Following a controversial departure from Stade Francais, Slimani signed for arch-rivals ASM Clermont for the 2017-18 campaign & is one of the best paid players in the country.

Slimani cemented his place in the France squad and took to his test match cap tally to 57 by the end of the 2019 World Cup in Japan.