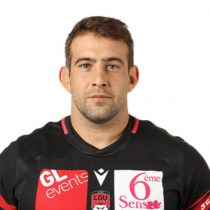 Born in Valreas in 1989, powerful front rower Raphael Chaume kicked off his career when he joined Pays d' Aix in 2007 before moving onto Clermont junior set-up the following season.

Chaume enjoyed prolonged success with the junior set-up at the club with silverware in the 2009, 2010 & 2011 campaigns. In 2011, Chaume made his professional debut with the French out-fit and has since gone on to make well over 115 caps for the club.

He was a finalist of the Top 14 in the 2014/15 season & has represented ASM in 20 European matches since his arrival at the club.

In November 2017, Chaume made his test debut against the All Blacks. Ahead of the 2018/19 season, he left Clermont signed a deal to join Lyon.

Chaume heads into the 2019/20 season with 30 Champions Cup caps and is still yet to add to his single test cap.