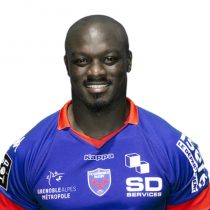 Ghana-born Rhule is an exciting former winger for the Cheetahs. He is known for his strength and speed with the ball in hand. Rhule impressed in his debut season with the Cheetahs in 2012, which earned him a selection in the 2012 end of year tour.

He became a regular in the Cheetahs Super Rugby and Currie Cup line up exceeding the 50 cap mark in both competitions. Unfortunately, Rhule had still not earned a full test by the end of year tour in 2016, despite becoming a more rounded player.

In June 2017 he finally made his Test debut when he started the first Test against France. He went on to start the remaining 2 games against the European nation.

Rhule played in 14 of the Cheetahs 15 Super Rugby matches scoring 6 tries, taking his Super Rugby total to 77 appearances with 23 tries. He also made his Pro 14 debut against Ospreys and made one other appearance against Zebre.

In August 2017 the winger announced that he would be joining the Western Province and Stormers after the completion of the 2017 Currie Cup.

Following the conclusion of the 2018 Super Rugby, he was allowed an early release from his contract with the Stormers in order to join Top 14 side Grenoble. He made 15 appearances scoring 6 tries for the Stormers.

Rhule spent two seasons at Grenoble before signing with La Rochelle in June 2020.

As of September 2020, he has made 2 appearances for the French club.