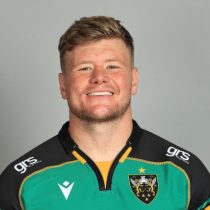 Reece Marshall became a full-time Saint at the start of the 2013/14 season having come through the same Moulton College set-up that produced the likes of Tom Collins.

He was educated at Manshead Upper School and his first rugby club was Dunstablians RUFC in Bedford. Marshall has also earned international honours, representing England Under-16s in 2011 and the Under-18s in the 2012 FIRA/AER Championship.

During the 2013/14 season, Marshall was on dual-registration with Old Albanians and the Wanderers, with whom he made his debut.

By 3 March 2021, the hooker has eight tries to his name for Saints since his debut back in 2015, and played a key role in the side’s run to Premiership Rugby Cup success in 2019 – starting the final against Saracens which Saints won 23-9.

Marshall made his 57th appearance in Black, Green and Gold last weekend having brought up his Saints half-century at the end of last season. He signed a new deal with Saints in March 2021.