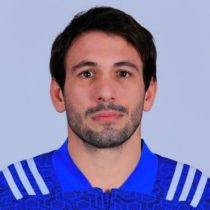 Lamerat began his career with Stade Toulousain before moving to Castres in 2012. Lamerat is currently representing Clermont in the Top 14

Lamerat is a talented player with the ball in hand who is able to step away from contact, as well as a strong ball carrier with a deadly hand-off. Lamerat does not shy away from contact and is known for putting in strong defensive performances for Clermont

Lamerat represent France at under 16 to under 20 and earned his senior international call up in 2014, he has since gone on to represent his country on many other occasions such as the 3 match series against Argentina in 2016.

Selected for French Barbarians against the touring Samoans at Clermont in November 2013. His first 5 caps were all as a replacement, until making a first start against Wales in Paris in round 3 of the 2015 6 Nations.

Went on the tour to Argentina last summer and scored his first try in the second test. Started all three of the November internationals.

In January 2018, he was again included in France's squad for the 2018 Six Nationa tournament, where he looks to add to his 16 international caps.