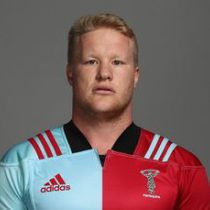 The big loose forward started his career at the Lions in 2010 but made a name for himself playing Currie Cup for the Pumas. His performances excited many and as a result, he was included in the South African President XV in 2013. His consistent string of performances continued to impress, and in the process earned him a contract just in time for the Sharks 2015 Super Rugby season.

While he might have been born in Alberton, South Africa he turned out for Namibia at the 2015 Rugby World Cup, qualifying through his mother.

Bothma was appointed as captain of Namibia in June 2016 and after 13 international caps to his name, and 40 points. To his surprise, he was then offered a short stint with a Japanese outfit, Toyota Verblitz before turning out for the Bulls later in 2016.

Harlequins spotted the powerful ball carrier's skills and included him in their 2017/18 squad.

After a first season blighted by injury, Bothma returned to the fray in 2018/19, making 11 appearances in all competitions. Off the field, Bothma is an entrepreneur who runs two business ventures, including the HomeFixer app and Botthms clothing.