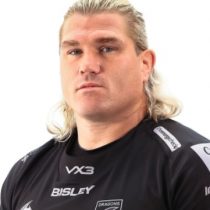 A powerful and skilful hooker, Richard Hibbard started off playing rugby league at Glan Afan Comprehensive School but his switch to union saw him become a professional as he made his Ospreys debut in 2004.

He had previously represented Taibach, Aberavon and Swansea RFC before a brief stint in rugby league with the now-defunct Aberavon Fighting Irish.

Continued great form with Ospreys saw Hibbard earn a call up to the Welsh national squad earning his test debut off the bench against Argentina in 2006.

Hibbard underwent shoulder reconstruction surgery at the beginning of the 2006-07 season, meaning that he only made four appearances for the Ospreys that season. Despite this he was called into the Wales squad to tour Australia in 2007 and was also a member of Gareth Jenkins' preliminary World Cup squad.

Hibbard missed out on the World Cup in 2007, but came on leaps and bounds since which saw him overtake Mathew Rees as Wales No.1 test hooker, and eventually being named in the 2013 Lions touring party. No mean achievement when you consider that Rees is a former Lion himself. Hibbard enjoyed a successful tour, coming off the bench in the first two tests before starting the decisive third test, which the Lions won emphatically to secure a first tour victory since 2001.

Hibbard was called into Warren Gatland's squad for the two-Test series in South Africa in the summer of 2008 before retaining his place for the 2008 autumn internationals, starting against Canada.

The following summer he pulled on the Welsh shirt twice on their tour to North America but an international hiatus until returned to the fold in 2011. Initially, as a squad player, Hibbard's influence grew and by the 2013 Six Nations he started four of Wales five matches as they retained the championship. And he was subsequently selected in the British & Irish Lions squad to take on the Wallabies.

He signed for Gloucester in 2014, ending a 10-year stint at the Ospreys which saw him amass 175 appearances and 50 points. During his time with Gloucester saw Hibbard make 73 Premiership appearances for the Cherry Whites starting 62 times and scored 7 tries.

In December 2017, Hibbard announced that he would be leaving Gloucester at the end of the 2017-18 season to join Welsh region, Dragons, on a three-year deal.

Since his return to Wales, Hibbard has made 36 appearances for the Dragons (As of June 2020).

In January 2022, he announced his retirement from rugby.