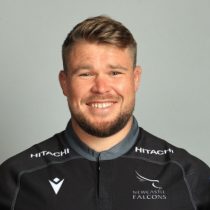 Schooled at Rondebosch Boys' High School in Cape Town, Palframan’s talent was noted in Durban as the tighthead prop joined up with the Sharks Academy in 2012 and represented the province in the U19 Currie Cup.

A very physical player and exceptionally good with ball in hand, his English ancestry and talent provided the opportunity to sign with London-Irish in late 2012.

The tighthead prop spent three seasons working within the Academy and at 19 years old, the burley prop made his senior debut in the European Challenge Cup in 2013.

His powerful scrummaging and diversity on the pitch made him an integral part of the London Irish squad.

Palframan scored three tries in 13 games for Irish during the 2016/17 season.

In June 2018, Palframan swapped the Madjeski Stadium for The Athletic Ground for the 2018/19 season after agreeing a deal with London Scottish.

He returned to the Premiership with Worcester Warriors after a one-season absence having previously played in the top flight for London Irish.

Palframan made his Warriors debut as a replacement in the Premiership Rugby Cup match at Bath in September 2019.

He made his first Premiership start for Warriors in the win at Harlequins in November 2019.

Palframan scored his first Warriors try in the European Challenge Cup victory over Enisei-STM in Russia the following week.