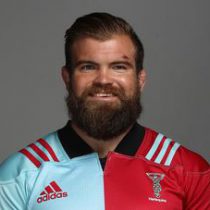 Buchanan played for England Under-16, U18 and was one of the standout players for England U20 in the IRB Junior World Championships in 2011.

He came through the Harlequins academy and was a great prospect following his impressive form for the first team when called on in the 2011/12 season. A lot of faith was put on him by the Quins coaching staff, touted as having a bright future.

Buchanan, who came through the club academy system, penned a new contract in 2016. He is tough and abrasive, has improved his set piece massively and his play in the loose is uncompromising.

The Harlequins Academy graduate has over 100 appearances for the club since making his debut against Leicester Tigers in 2010 and he has scored ten tries.

Having represented his country at all age-grade levels, the hooker was called into the 2013 England team to tour Argentina. A year later, he was named in the England squad to play the Barbarians at Twickenham Stadium.

Despite an injury-stunted 2017-18, he made his return to the squad towards the end of the 2018/19 season and was selected to start in a number of the team's high profile matches in the back end of the year, including the European Rugby Challenge Cup Semi-Final against Clermont Auvergne.

Away from the field, Rob owns his own business, The Mobile Bubble Club - a stall that serves champagne to supporters in the North Fan Village at Harlequins home matches.

In June 2020, the Harlequins centurion announced his retirement from rugby.