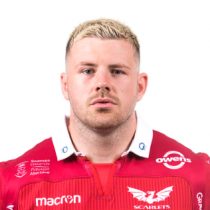 Evans was part of a strong Scarlets front row trio, along with Kirby Myhill and Samson Lee, that played an important role in the Wales U20 team that finished 3rd in the 2012 IRB Junior World Championships in South Africa.

The prop from Haverfordwest is a Scarlets academy product and earned his first international cap with Wales against Ireland in 2015 and hasn’t looked back since.

In January 2015, Evans was named in the 34-man Wales squad for the 2015 Six Nations Championship, making his debut as a half time replacement in the win against Ireland.

Not only is Evans a talented scrummager, the loosehead prop is also an effective ball carrier in the loose, a determined defender and is often seen contesting the breakdown.

In April 2017, he signed a contract extension with Scarlets that wouldl see him remain at the club for the foreseeable future. The Welsh front-rower appeared in all of Wales 2017 Six Nations matches.

Evans was then named in Wales 2018 6 Nations squad and entered the competition with 20 test caps to his name.

He featured in all 5 of Wales 6 Nations matches and was named in the Wales squad for the 2018 Summer Tour.

Evans went into the 2018 November International with 27 test caps.

He was again be named for the Wales squad ahead of the 2020 Six Nations with a total of 36 caps.