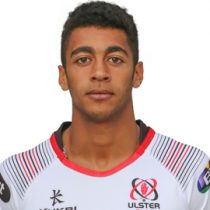 Following a stint with the Ireland 7s program, winger Baloucoune burst onto the scene for the senior squad in the 2018-19 season, making try-scoring contributions against the likes of Munster, Leicester, and Racing 92.

His impressive performances earned him a development contract for the 2019-20 season.

In the 2020 season, he came off the bench in his opening game to make a 9-minute cameo and started every other game, playing a full 80 minutes, until the season was brought to a halt.

As of May 2020, the winger has made 21 appearances for Ulster and has scored 60 points.

His impressive performances for Ulster also led to a call-up for Ireland and his international debut in July 2021, in which he scored a sensational solo try versus USA.

In April 2022, he signed a new deal to keep him with the Irish province until at least the summer of 2025.