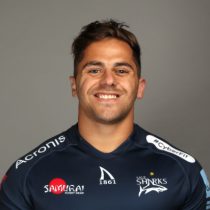 A Blue Bull centre since under 16, van Rensburg went on to play all age-group rugby for the Pretoria team, with highlights coming in the form of South African Schools selection in 2012, representing the Baby Boks at the IRB Junior World Championships and a senior Currie Cup debut in 2013.

He began his professional career with the Blue Bulls in the 2013/14 season, making seven appearances and scoring four tries before moving to the Lions rugby set-up where he became a key figure for Golden Lions in their Currie Cup campaigns.

He had a strong Currie Cup for the Lions in 2015 and was subsequently added to the Lions Super Rugby squad for the 2016 season.

van Rensburg made his Super Rugby debut against the Sunwolves in the 2016 Super Rugby tournament and made a further 15 appearances as he was one of the stand-out players for the Lions as they made their way to the Super Rugby final.

Following an excellent debut Super Rugby season he was called into the Springbok squad and made his debut in the in South Africa's last match of the 2016 season where they lost 27-13.

Boasting a strong physical presence, van Rensburg is powerful runner with the ball in hand as well as being a devastating finisher and he has established a reputation as one of South Africa’s most exciting young talents. In November 2017, Sale Sharks signed the centre on a short-term loan deal.

He made 5 appearances for Sale in the Premiership scoring 3 tries and making 91 metres from 35 carries before re-joining the Lions ahead of the 2018 Super Rugby season.

The exciting centre entered the 2018 season having helped the Lions to consecutive Super Rugby finals in his first two seasons in the competition making 27 appearances.

In June 2018, the Lions agreed to release him to join Sale Sharks on a permanent basis after his successful loan spell with the club.

As of May 2020, he has made 35 appearances for the Premiership club and has scored 55 points.