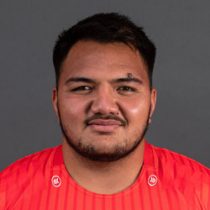 Born in Hawaii, Roman Salanoa is a big powerful front-rower with plenty potential. Salanoa has an interesting background having played American football at high school featuring as a defensive lineman.

He turned his attention to rugby when he gave the sport a go late on at school and ended up playing for the USA under-20 team in the World Junior Trophy in 2016.

Having represented the USA U20s as an 18-year-old, Salanoa caught the attention of Leinster's Academy and he made the move to Dublin in 2017.

Since then, he was selected for Leinster’s sub-academy and has been working his way up from there.

He progressed into the Leinster Academy in 2018 and made three PRO14 appearances for the province during the 2019/20 season before making the move to Munster in 2020.

In January 2021, he signed a new three-year deal with Munster, having made 7 senior appearances for the Irish side the previous season.