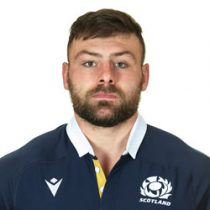 Sutherland was included as 24th man in Scotland's 2015 Six Nations squad as well as the Rugby World Cup quarter-final against Australia. He wasn't given the opportunity to take to the field for his country until his inclusion in the 2016 Six Nations.

He made his debut for Scotland in the clash against Ireland, when he came off the bench in the second half. Sutherland went on to represent Scotland a further 3 times in 2016 and was unlucky to miss out on selection for the 2017 6 Nations Championship.

February 2017 saw him sign an extension with Edinburgh until 2019.

Sutherland endured a frustrating 2017/18 season which saw the prop struggle with injury, however, he returned to fitness in 2018, scoring an integral try in Edinburgh's bonus-point win over Southern Kings in January 2019.

The prop put pen-to-paper on a one-year extension which would see him remain in the capital until at least 2020.

He featured in Scotland's Six Nations squad for 2020, earning a first international cap in three-and-a-half years against Ireland in Dublin and starting each match thereafter.

In May 2021, Sutherland was selected for the 2021 British and Irish Lions for the first time.

In July 2021, it was announced that Sutherland would be leaving Edinburgh and taking up with Worcester Warriors.