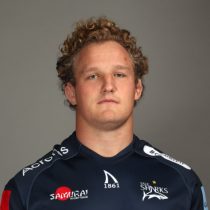 Born in Bolton in the north of England, Harrison is a powerful scrummaging prop forward. Having represented England at various age-group levels, Harrison's professional career began in 2011 when he made his debut for Sale Sharks.

Having established himself as one of the most consistent performers in the Premiership, Harrison's impact has also registered on the international radar with the former Lymm High School pupil having turned out for England sides against the Barbarians at Twickenham in both 2014 and 2017 as well as with the Saxons side in 2016.

Harrison's consistency also saw him invited to train with Eddie Jones' England squad last May to provide yet more evidence that he is very much a contender for further international recognition.

In March 2018, Harrison committed his long-term future with Sale Sharks after signing a new four-year contract.