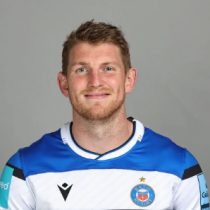 Ruaridh was among six students from his university in the Great Britain Students side that won the 6th World University Sevens Championship in Brazil in August 2014.

Educated at Yardley Court in Tonbridge, Ruaridh captained the Sevens side at Cranbrook School and played for Cranbrook RFC.

The inside centre signed for England Sevens for 2015-16 and scored a debut try against Kenya in his first tournament in Dubai in December 2015.

He was selected as part of the Great Britain squad for the 2016 Summer Olympics that won silver at the 2016 Olympic Games in Rio.

Initially selected as a traveling reserve, McConnochie got called into the 12-man squad after England Sevens’ Alex Davis sustained an injury during the team's preparation camp.

Having scored eight tries on the 2017/18 World Rugby Sevens Series, which had so far stopped in Dubai, Cape Town and Sydney, McConnochie was ranked one of the best performers alongside teammate and captain Tom Mitchell.

In January 2018, it was confirmed that McConnochie would leave the England Sevens programme at the end of the 2017/18 season when he joined Bath Rugby to return to the 15-a-side game.

In July 2019, McConnochie was named in England's training squad for the 2019 Rugby World Cup.

He earned his full England cap on 6 September 2019 against Italy, starting on the wing and playing 51 minutes before being replaced by Bath teammate Joe Cokanasiga.