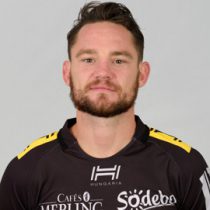 Born in Gloucester, England, Lamb is a flyhalf by trade who has also featured at centre in the past.

A graduate of St.Peter's High School, Lamb has enjoyed stints at Gloucester, London Irish and Northampton Saints. In 2007 he made his first appearance for the England Saxons side and in the summer of 2013 it was announced that Lamb would be joining Leicester Tigers.

Lamb was one of 18 players who left the Warriors earlier this month when their contracts at the club came to an end.