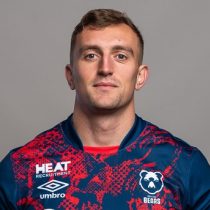 Bedlow was part of the Sharks squads which played at the Woodlands in August 2013 & 2014.

He also made four National Two appearances for Preston Grasshoppers in the 2013 season and represented Lancashire & the North U'18s.

In July 2015, Bedlow had a spell with South African side the Eastern Province Kings, representing their Under-21 side in the 2015 Under-21 Provincial Championship.

Bristol added Bedlow to their ranks as plans for the 2017/18 season took take shape.

He joined from Sale Sharks, where the centre made eight first team appearances since graduating through the Club’s Academy system.

In January 2018, he was loaned to Championship side Hartpury.