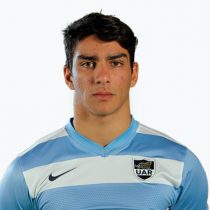 From Córdoba, Santiago Carreras is an exciting outside back who first made his mark with the Argentina u20s in 2017.

Comfortable at fullback and on the wing, Carreras has also made appearances in the centres.

The talented speedster was called into the wider Argentina squad in 2018 having joined up with the Jaguares Super Rugby team. He made his debut for the Argentina XV in the America's Rugby Championship.

Carreras had a breakthrough year in 2019 making his Super Rugby debut for the Jaguares and scored four tries in seven appearances for the side and was rewarded with a place in the Argentina Rugby World Cup squad.

He made his test debut for the side in 2019 and took his test cap tally to 8 during the 2020 Tri Nations where he started at fullback in Argentina's historic 15-25 victory over New Zealand.

Following the conclusion of the Tri Nations in Australia, Carreras signed a one-year deal with Premiership club Gloucester until the end of the 2020/21 season.