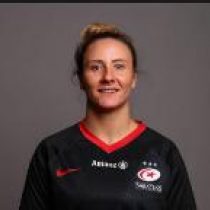 A product of Roundwood Park School and Grove Junior School, Sarah McKenna took up the game at the age of six at her local club Harpenden, where her dad coached at mini level.

A versatile player, who is comfortable operating at fly-half, centre or full back, she has played for Scorpions, Old Albanian, Wasps and Saracens, where she was a key part of the latter’s 2014-15 and 2018-19 title-winning sides.

Sarah’s England debut arrived in August 2011 when she came off the bench in a 15-11 victory over the United States and has featured in World Cup and Six Nations squads.

She also scored a memorable hat-trick against Australia in the 2017 International Women’s Rugby Series.

In 2015, Sarah was a key part of the England Sevens squad that secured a third-placed finish in round one of the Rugby Europe Sevens Grand Prix in Kazan, Russia, scoring a try and nine conversions.

Sarah was then forced out for nine months by an ankle injury which caused her to miss the 2016 Olympic Games in Rio but she returned to action in February 2017.

In 2018, she played in three HSBC World Rugby Women’s Sevens Series events – in Sydney, Langford and Paris – and was been selected for the England squad heading to the Rugby World Cup Sevens in San Francisco.

She returned to XVs in 2018 to re-join Saracens and helped the club win the Tyrrells Premier 15s title, as well as starting every game at full back for England in the Women’s Six Nations as they secured a Grand Slam.

Growing up, Sarah played netball at county level and away from the pitch, she has a passion for squash and music, having turned her hand to DJ-ing.

Following the Six Nations she had 23 test caps.

In October 2020, McKenna signed a new deal with Saracens Women having been with the side for two seasons.