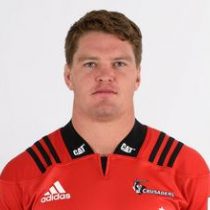 Rugby is in Scott's blood. His father, Kevin "Smiley" Barrett, played over 100 games for Taranaki and 33 matches for the Hurricanes in 1997 and 1998. Scott has four brothers, two of whom are also current Super Rugby players and All Blacks (Beauden and Jordie.)

Injuries to international second-row forwards Sam Whitelock and Luke Romano saw Barrett named on the replacements bench for the match against the Blues on 5 July 2014. He came on as a replacement for Jimmy Tupou in a 21-13 win for his side.

He is an athletic lock who has a great skill set and can also play at flanker.

Barrett made his international debut for the All Blacks in 2016 against Ireland in Chicago.

It was announced in May 2016 that Barrett extended his contract with the Crusaders for another two years.

In June 2017, the four-times capped lock was named in the All Blacks squad for the NZ Lions Series.

In May the man nicknamed Scooter signed a new deal with the Crusaders and New Zealand Rugby until the end of 2020.

He helped the Crusaders lift the title for the second year in a row.

He was part of the All Black squad that finished 3rd in Japan at the 2019 Rugby World Cup.

He has 36 test caps to his name and has scored 25 points.