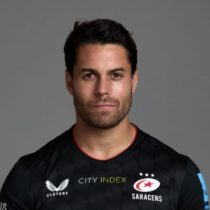 Former Crusader Maitland made the conscious decision to up sticks and move halfway across the globe to Scotland in order to further his career on the international stage. Originally from Tokorua in New Zealand, Maitland's form impressed for club and country, becoming an integral part of Glasgow Warriors.

After a stellar 6 nations campaign in 2013, the silky winger was selected to tour Australia with the British and Irish Lions.

Maitland then put pen to paper on a two-year extension to remain with the Allianz Park outfit until 2020.

In November he was recalled into the Scotland national team for the Test against Australia, and later received a call-up for the 2018 Six Nations tournament.

He cemented his name in Scotland's 31-man squad for the Rugby World Cup in Japan before being included in the nation’s squad for the 2020 Six Nations.

After 73 appearances and 29 tries scored for Saracens, Maitland signed a new two-year deal with the North London club.