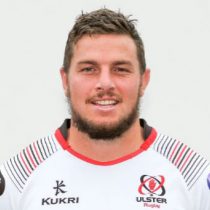 Reidy joined Ulster in 2014 from Counties Manukau. Since making the move the back row has made 19 appearances for Ulster.

He made his first appearance for Ulster in November 2014 in the 23-6 win over the Newport Gwent Dragons and scored his first try in October 2015 against Benetton Treviso.

He agreed a 2 year contract extension with the province in February 2016.

In May 2016, Reidy, who is Irish-qualified through his grandfather who is from Castlegregory, was selected as part of the 32-man squad for the tour of South Africa.

The New Zealand born back row star signed a 3-year contract extension with Ulster, keeping him with the region until 2020, after joining the club from Counties Manukau in 2014.

Reidy was called up to the Ireland summer tour squad for the injured Tommy O' Donnell. Sean has played 58 times for Ulster (2 Ireland caps) scoring 9 tries.

Irish-capped Reidy has since made over 100 appearances for Ulster, making him one of the most-capped players in the current squad.