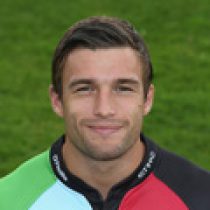 Seb Stegmann is a product of the club's proud academy and is a try-scoring machine.

He played for England at Under-16 U18 and U20 levels and is starting to rack up more regular first team appearances. Still a relative rookie in his professional career, Stegmann impressed in his early years.

Stegmann has developed from a dedicated winger, he is now adept at playing either on the wing or in the centre. His try scoring prowess is plain to see securing 13 five pointers for London Welsh in their promotion winning season in 2013/14.

Stegmann signed for Yorkshire Carnegie ahead of the 2015/16 Greene King IPA Championship season.

In May 2017, Stegmann announced that he will be joining Ealing Trailfinders for the 2017-18 season.

The 28-year-old can play wing, fullback and centre and has played three times for Carnegie against Ealing Trailfinders this season, including the Greene King IPA Championship play-off semifinal at Headingley Carnegie Stadium.

Stegmann made his debut for the Yorkshiremen against Ealing Trailfinders early in the 2015-16 season and he ended his debut campaign with six tries in 20 appearances. This season he added a further five scores from 15 appearances, including two in the play-off final second leg.