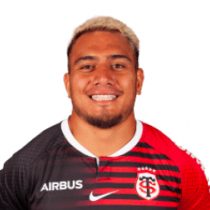 Younger brother Christopher Tolofua, Selevasio joined Stade Toulouse's Academy in 2014. He has since developed into a regular starting for Toulouse as the side has become one of the top sides in France once again.

The 2018-19 season was a breakout season for Tolofua who stepped to take part in 17 Top 14 games and 5 in the Champions Cup.

Jerome Kaino's arrival at the club has been undoubtedly a significant contribution to his development.

The powerful ball carrying and tackling no.8 can play across the back row and was another standout for the successful French u20 side in 2017 and 2018 season.

His achievements heading into the 2019/20 season include representing France from u16 to u19, wining the U18 European Championship in 2015, France Minimes, Cadets A and B Champion and a Top 14 title.

By the start of the 2019/20 season, he has made 28 appearances for Toulouse scoring two tries with 17 of the 28 coming during the previous season.

His form for Toulouse during the start of the 2019/20 season saw him earn a call up to the France squad ahead of the 2020 Six Nations, where he will look to make his test debut.