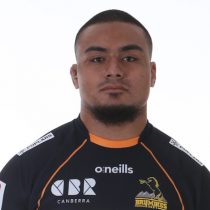 Shambeckler Vui showed early promised in Australia's youth ranks and has continued to develop on the tighthead side of the scrum.

A standout for the 2014 Australian schoolboys, Vui went to two Junoir World Championships with the Australian U20’s.

Vui possesses skill and strength beyond his years and became an internet sensation when he scored one of the best tries of the Junior World Cup with a barnstorming 50-metre run against Italy.

An abnormally athletic Tighthead prop, Vui made a name for himself with massive hits, and barnstorming carries with his performances catching the eye of the Western Force who in November 2016 signed the front row for the 2017 Super Rugby campaign.

He made his Super Rugby debut against the Blues in round six of Super Rugby 2017 and re-signed with the club for a further two seasons later that year.

However, after the Force were axed from Super Rugby Vui signed with the Waratahs ahead of the 2018 Super Rugby season having made 7 appearances for the Force.

The stiff competition at the Waratahs meant that he would play just 4 games over the next two Super Rugby seasons before switching to the Brumbies ahead of Super Rugby 2020.

With a strong stock of Tighthead props at the club, Vui will likely be looking to compete with Leslie Leuluaialii-Makin and Tom Ross for game-time in but his unique talents are definitely something for fans to get excited about.