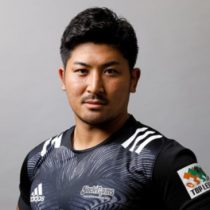 Playing his club rugby at the Ricoh Black Rams, the loose forward is a prolific try scorer in the Top League. Following some good form he made his Brave blossoms debut in 2016 in a defeat against Argentina.

Since joining the Sunwolves in 2017, he has featured 7 times scoring just once this season. He was named in Jamie Joseph's Japan squad for the 2017 June Internationals and will hope to add to his 6 caps.