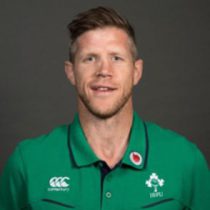 A former Irish international and long time Scarlets stalwart, Easterby hung up in his boots in 2010 after 109 caps for Scarlets and 65 caps for Ireland.

Easterby made his Ireland debut in 2000 against Scotland in the 6 Nations and went onto become a regular in the back row when fit. In 2003, he was selected in Ireland's World Cup squad alongside older brother Guy Easterby.

After Lawrence Dallagio was ruled out of the 2005 British & Irish Lions tour to New Zealand, Easterby was named as his replacement and went onto make 2 appearances, scoring a try in the process.

In 2010, Easterby was forced to hang up his boots through injury at the age of 35 and on his retirement was named as the Scarlets defence coach. He was then promoted to head coach in 2012 after Nigel Davies departure to Gloucester.

After 2 years in the job, Easterby left Scarlets to become Ireland's defence coach under Joe Schmidt.

He has continued to work with the side ever since and has moved into the role of forwards' coach.