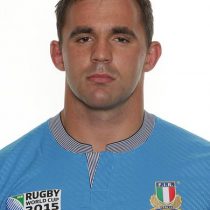 The son of the Italian lock Robert Favaro, Simone started his career at a young age playing for the Treviso under 19’s before moving on to the Super 10 with Rovigo and Overmarch Parma. At the age of 20 he was the youngest player included in Nick Mallet’s squad for the 2009 Six Nations.

Represented Italy at U18 and U19 levels as well as Sevens. Played for Italy U20 in the Six Nations 2008 & Junior World Championships in Wales later that year.

Italy A debut came against Scotland in 2009, made his full test debut as 20 year old v Australia in Melbourne June 2009.

Made his RBS 6 Nations debut off the bench against France in round one 2012, made 4 appearances that season, and all 5 the following, but played just once in the Championship since, in the victory over Scotland at BT Murrayfield in 2015.

Scored his first test try against Samoa in Ascoli in 2014, went on to play three of Italy's games in RWC2015 but did not feature again until making a try scoring return in Argentina last June. Skippered the team against Tonga in November.

He signed for Glasgow Warriors for the 2015/16 season, a contract he later extended until May 2017.

In January 2017, he was named in the Italy squad and will be able to add to his 10 Six Nation caps in the 2017 Six Nations tournament.