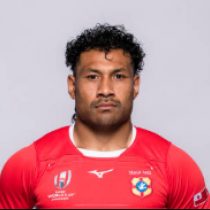 Born in Tonga, Takulua moved to New Zealand in 2003 and began his rugby journey there with Northland before signing a developmental contract for Super Rugby side, the Blues in 2014.

The following year, he signed for Newcastle Falcons on a 15-month contract.

Takulua made his Aviva Premiership debut for the Falcons at home to Leicester Tigers in March 2014.

A former Tonga Sevens player, he received his first full international call-up in 2014, scoring a try in a man-of-the-match performance against Japan in the 2015 Pacific Nations Cup.

In August 2017, Takulua handed Newcastle Falcons a major boost in the build-up to the 2018-18 Aviva Premiership season by signing a four-year contract extension.

He was one of the Falcons’ stand-out performers last season, scoring six tries in his 13 Aviva Premiership appearances and kicking goals at a rate of 88%, the second-highest in the division based on a minimum of 20 attempts.

He is capped 23 times by Tonga, whom he helped to an unbeaten European tour last autumn and Rugby World Cup 2019 qualification.

In 2020 following their search for a replacement to fill the void left by Rhys Webb, Toulon signed Tongan scrum-half until 2022.