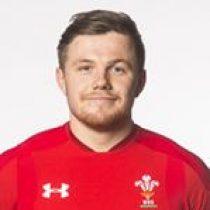 Capable of playing on either wing or at fullback Evans has gained a reputation as an electric outside back and was on stand-by for Wales’ Summer Tour 2016 to New Zealand.

Evans made an impact in his first season with the Scarlets, 2014-15, making nine starts in nine games, scoring two tries. 25 appearances and five tries followed in the 2015 season including European Rugby Champions Cup starts.

January 2017 saw him extend his stay at Scarlets in an undisclosed deal.

Uncapped Evans has been included in Rob Howley's 36 man squad for the upcoming 6 Nations Championship 2017.

Evans has enjoyed a fantastic season with the Scarlets and picked up the Fans Player of the Season after 27 appearances as well as putting pen to paper on a new contract.

In May 2017, the uncapped Evans was named in the Wales summer tour squad to play Tonga & Samoa. He went on to win 5 caps for Wales scoring 3 tries.

In January 2018 he was named in the Wales 6 Nations squad and will look to make his debut in the competition.

Evans scored two tries in four appearances during the 2018 Six Nations and was included in the Wales squad for the June Tests, after yet another impressive season with Scarlets.

Evans went into the 2018 November International with 10 test caps.

Ahead of the 2019 Six Nations, Evans has had 4 previous 6 Nations appearances scoring 20 points.

In January 2020 he signed a new contract with the Scarlets after 111 appearances for the side.