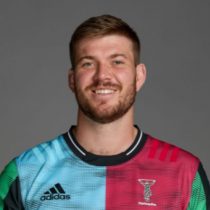 Lewies was included in the Sharks XV Vodacom Cup side in 2012 and made a late substitute appearance in their match against the Boland Cavaliers in Malmesbury to make his first-class debut.

He remained in the side for the rest of the season, starting two matches in total and making three substitute appearances, including coming on in the Currie Cup final, where he contributed to the Natal Sharks beating Western Province 33–19. Lewies was included in the Sharks squad for the 2014 Super Rugby season and made his debut in a 31–16 victory against the Bulls in Durban.

Midway through his debut Super Rugby season, Lewies was named in the Springbok squad to face Scotland following the injury to Bakkies Botha and Flip van der Merwe. He came off the bench for Victor Matfield in Port Elizabeth.

In 2016, Lewies was included in the South Africa 'A' squad that played a two-match series against a touring England Saxons team. Lewies played in all 16 of the Sharks 2017 Super Rugby matches, scoring his first try for the side, and the 2m tall lock will join Japanese side Kamaishi Seawaves and will be unavailable for the Sharks Currie Cup campaign.

He will return for the 2018 Super Rugby season, where he will look to add to his 51 Super Rugby matches and one try. Lewies went on loan with Lions during the 2019 season and has made over 80 appearances for the Sharks.

He joined the Harlequins ahead of the 2019/20 season. In his opening two games, Lewies found himself on the wrong side of the law and was yellow-carded in both games. Despite his rocky start, Lewies went onto have a massive impact at Quins in his first season making 17 appearances for the side.

Ahead of his second season at the club, Lewies was named as Harlequins' new captain succeeding Chris Robshaw.