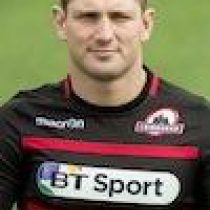 Steve played for Scotland at A, under-19 and under-21 levels as well as appearing in the national sevens squad, making his debut in the 2008 IRB Twickenham tournament and going on to play a week later in the Murrayfield event.

Steve captained the Edinburgh under-18, under-19 and under-20 teams who won their respective district championships in successive years (2002 to 2004), and he played for the Scotland under-19 team in the 2002–03 season

His Scotland A debut came in the 25-0 win over USA Eagles at Netherdale in November 2010, and he came off the bench in the victory over Italy A in January 2011.

Steve captained the Edinburgh under-18, under-19 and under-20 teams who won their respective district championships in successive years (2002 to 2004), and he played for Scotland under-19 in season 2002-2003. At that time he was with Currie, and after a switch to Watsonians he made his under-21 international debut as a substitute in the February 2005 match against France in Bourgoin.

During the former hooker’s professional playing career, he made 44 appearances for Edinburgh over two spells at the club. In between, he experienced two years in the English Championship with Doncaster. He represented Scotland at under-21, sevens and A level before earning a full international cap against Samoa in 2013. He is now an experienced coach with a UKCC Level 4 qualification.

Lawrie made the move to Edinburgh from Tennent’s Premiership side, Watsonians, where he had been Head Coach since the start of the 2018/19 season.

Before joining Watsonians in 2018, the talented coach assisted Phil Smith at Heriot’s for the previous five years and was a key figure in the Goldenacre outfit winning the league championship in 2015 and a league and cup double in 2016.

Lawrie re-joined Edinburgh as Assistant Forwards Coach ahead of the 2019/20 season.