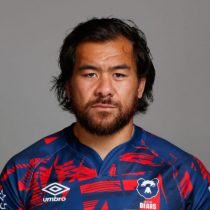 A former New Zealand Secondary Schools and Under-20 representative, Luatua made his provincial debut for Auckland in 2010. The versatile lock/loose forward was elevated to the Blues squad in 2012 as injury cover and performed with distinction to see him feature regularly on the field.

Luatua earned his first All Blacks jersey in 2013 against France. During 2015 he was nominated as Auckland captain to replace an injured Jerome Kaino, but dislocated his shoulder two rounds later. A successful recovery saw Luatua start for the 2016 Super Rugby side.

After over 50 Super Rugby appearances for the Blues, Luatua agreed terms to join Bristol Rugby at the end of the 2017 Super Rugby season.

He went into the 2018/19 season having made 12 appearances for Bristol, scoring 15 points.