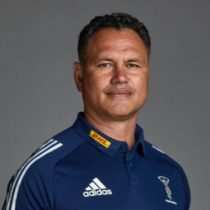 Matson attended Nelson College from 1985 to 1986, before completing his secondary education at Christ's College in Christchurch.

As a player, the centre spent his career at New Zealand’s provincial side Canterbury and Super Rugby’s Crusaders before moving overseas for spells with Brive, London Irish and Japanese side Yamaha Jubilo. Fijian-born Matson made 58 appearances for Canterbury and played 25 games for the Crusaders in the 1990s.

He was a member of the New Zealand national side, the All Blacks, in 1995 and 1996, playing 10 matches but no internationals. Matson also earned representative honours for Fiji at the 1999 Rugby World Cup. He played two tests for Fiji at the 1999 World Cup, a team he also assisted as an attack coach in the 2015 tournament.

The Fijian’s coaching career started at Yahama Jublio, where he spent the final year of his playing career coaching before returning to the Southern Hemisphere for positions with University of Queensland, Gold Coast Breakers, Canterbury, Crusaders.

Matson joined Canterbury as their assistant coach in 2009, a role he held for three seasons before being promoted to head coach in 2012.

In 2013 he joined the Crusaders coaching team and was also appointed assistant coach of the Maori All Blacks that same year, working alongside Colin Cooper for his three years with the national team. Matson was appointed Bath Rugby’s Head Coach in summer 2016, following three years as Assistant Coach to Todd Blackadder at Crusaders.

In September 2017, Matson announced that he would be leaving Bath Rugby to return home to New Zealand due to family reasons. Matson was appointed the assistant coach for the Chiefs for the 2018 & 2019 Super Rugby seasons and was retained once Warren Gatland tookover as the side's head coach in 2020.