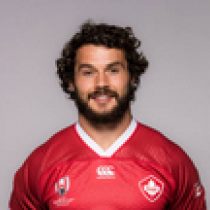 Canadian winger Taylor Paris left Canada to pursue his rugby career in England, he started off with a brief stint at the Northampton Saints Academy, before a move to Scotland saw him represent Glasgow Warriors on two occasions.

Paris was spotted by Agen in 2013 and signed a deal with the French outfit ahead that would see him making over 50 appearances.

Paris was called into the Canadian under-20 side, he later represented the Canadian national side and sevens side.

He has accumulated over 20 test caps for Canada and continues to perform for Agen as the fight for promotion to the Top 14.

He helped Castres to the TOP14 title in his first season at the club and has been included in Canada's Pacific Nations Cup squad having already earned 27 test caps scoring 18 tries.