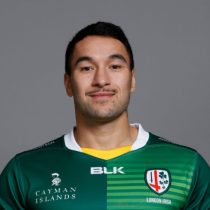 London-born centre Terrence Hepetema arrived in Leicester Tigers as an injury replacement, signing in 2013 and made two appearances in the Heineken Cup before claiming a league debut.

After spells with local club Johnsonville and then Wellington in New Zealands, Terrence earned a place in the Australia National Academy and then the Waratahs, making his Super 15 debut in 2013.

He has since represented Bay of Plenty in the Mitre 10 Cup.