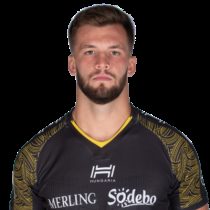 Lavault started rugby in Thouars before joining Stade Rochelais in 2016.

In June, he was crowned U20 World Champion with Les Bleus after having played the entire competition as a starter.

Bothered by injuries for two years, he played his first match in the La Rochelle first team during the 2019/2020 season.

As of September 2020, he has made 13 appearances for the French club and has scored 5 points.

In January 2021, he was called into the France Six Nations squad.