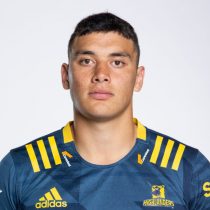 Umaga-Jensen is a New Zealand under 20 outside back who's recent performances with Wellington saw him being selected in the Highlanders wider training squad ahead of Super Rugby.

Umaga-Jensen missed the 2017 U20 Junior World Rugby Championship through injury.

He also has a twin brother, Peter, who also plys his trade with the Hurricanes and Wellington.

Umaga-Jensen was in outstanding form for Wellington in 2017 scoring 4 tries in his first 8 matches and was rewarded by the Highlanders with his Super Rugby contract.

The youngster was expected to be a regular starter following the departure of Malakai Fekitoa in the previous season.

After another season-ending shoulder injury, Thomas will be looking to impress the coaching staff for a chance to get some regular starting time if he can become fit midway through the season.