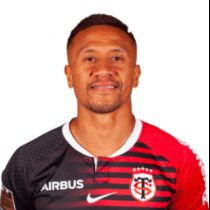 Tim Nanai-Williams is an exciting attacking back with pace and power.

The versatile former All Blacks Sevens player’s agility and speed make him highly threatening with the ball in hand. He earned a nomination in the 2012 Steinlager Awards for ITM Cup Player of the Year after being a key play maker in Counties Manukau’s ITM Cup Championship win.

Using the 'Rugby Loophole' Nanai-Williams was one of the first players who changed his allegiance and moved to playing for Samoa 7's and the Samoa test side. He was selected for the Samoa 31 man squad to play in the RWC and will be a huge asset.

Following the conclusion of the 2015 Rugby World Cup Nanai-Williams joined Japanese side Black Rams on a 2 year contract.

He re-joined the Chiefs ahead of the 2017 Super Rugby squad having played 77 times and scoring 136 points during his first stint with the Super Rugby side.

In May 2017, Nanai-Williams signed a one-year extension with the Chiefs.

The versatile playmaker has won two Super Rugby titles with the Chiefs scoring 26 tries in his 84 matches.

In November he was named in the Samoa squad for the November Tests and featured in all three of their matches at flyhalf, taking his test tally to 11.

In 2015, Nanai-Williams said the following regarding his decision to represent Samoa instead of the All Blacks:

"I'm loving every minute of it. The decision, to come here and play for Samoa, I've loved every moment of it ever since I made the decision. I've said it before, that when I made the decision, it was pretty much that if my family was happy for me to go with the decision then I was happy with it. So I just followed my heart and it's quite funny being the only person doing it. I've had no guidance. I'm just enjoying every time."

In December 2017, Nanai-Williams signed a three-year deal with the Top 14 side Clermont and will join the side at the end of the 2018 Super Rugby season.

In February 2018 Nanai-Williams underwent an operation on his shoulder that ruled him out for the remainder of the 2018 Super Rugby season.

In 2019, Nanai-Williams represented Samoa in the World Cup in Japan.

In August 2021, it was announced that Nanai-Williams had signed a deal with French Top 14 club Toulouse.