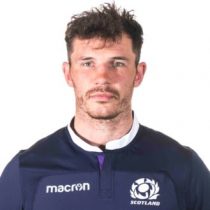 Tim Swinson made his Newcastle Falcons debut against Bath during the 2007/8 season and went on to amass over 100 appearances for the club. In the 2012/13 season, he signed a deal to join the Glasgow Warriors.

He qualifies for Scotland courtesy of a maternal grandmother from Glasgow and made his Scotland debut as the starting lock in the 2013 defeat to South Africa in Nelspruit.

A new Glasgow deal soon followed in January 2017, with him extending his stay at Scotstoun until at least 2020.

Also in January 2017, he was included in Scotland's squad to compete in the 2017 Six Nations tournament.

In May 2017, after an encouraging Six Nations period scoring a try against France. Swinson was included in the Scotland squad for their three-Test summer tour squad.

In August 2019, he was invited to train with Scotland’s wider squad for Rugby World Cup 2019 as cover for Sam Skinner, who was been ruled out through injury.

As of December 2019 the Glasgow Warriors player has played 132 games for his club since moving to the Scottish club from Newcastle.

In May 2020, Swinson announced that he would retire from the sport at the end of the season.