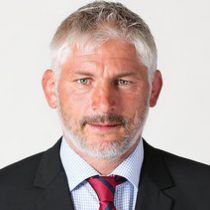 Blackadder captained the first Crusaders team in 1996, holding that position until 2001 and leading them to three titles.

As a player, he appeared 25 times for the All Blacks, leading them in 14 clashes.

His leadership skills have seen him being named captain of the Canterbury provincial team (1990 - 1996) and the Crusaders Super 12 team (1996-2001) before shifting into coaching.

Scotland marked the beginning of his coaching career, being appointed assistant coach of the national side in 2003-2004 after a playing stint.

After several more successful coaching roles, he settled at the Crusaders in 2009. During his time at the club, Blackadder coached two of NZ greats, Dan Carter & Richie McCaw.

Following Mike Ford's failed attempts to lead Bath Rugby to a higher finish in the Premiership league in 2015, Blackadder was called up to replace Ford for the 2016/17 Premiership season.

His arrival saw Bath claim an 18-14 victory against Northampton Saints to earn their first win at Franklin Gardens in 16 years.

After three seasons at the club, Blackadder was granted early release from the club in order to allow him to join Toshiba in Japan as Head Coach.