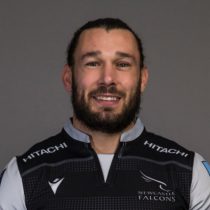 The first of four players to swap London Welsh for Sale Sharks after their relegation from the Premiership at the end of the 2012. Capable of playing on the wing or at full-back, Arscott moved north after a year at Welsh, who he joined from Worcester.

An England U19 international during his time at Plymouth, he has also played for the Saxons and made 19 Premiership appearances last season to take his career tally beyond 50 after an earlier spell in the top flight with Bristol.

On 19 January 2017, Arscott had his contract terminated by Sale Sharks after an internal investigation found that he allegedly leaked confidential team information to Bristol before their Premiership game on 1 January.

Yorkshire Carnegie the signed winger for the remainder of the 2016-17 Championship season.

In April 2018, the experienced Premiership performer announced that he will join Newcastle Falcons ahead of the 2018-19 season.

Arscott joined from French club Rouen where he was playing under the tutelage of Richard Hill, the man who was at the helm when he made his Premiership debut for Bristol back in 2007.

After 28 appearances for the Falcons, he signed a new two-year deal in February 2020.