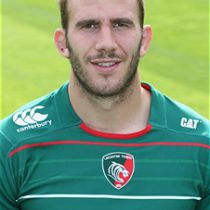 Injuries have plagued Croft in recent seasons, but few would argue that he is one of the leading blindside flanks in the world when fit. Big, strong and also athletic, the British & Irish Lions player has all the qualities to become an English legend if he can avoid the long-term injuries that have limited his appearances. Croft is a genuinely classy player with the skills of a loose forward combined with the size and strength of a lock. Having been selected to tour Australia with the 2013 Lions, Croft excelled in the warm up games to secure a starting berth for the opening test game of the series. Croft’s height and ability in the area make him an impressive lineout option and his defensive work is world class. The Tigers star is also one of the best attacking 6s in European rugby. At the start of the 2013/14 season Croft was once again hampered by injury and was ruled out for the season after suffering an anterior cruciate ligament injury. He returned on the final game of the season and played 20 minutes against Saracens on the final day of the season.

2009 IRB player of the year nominee