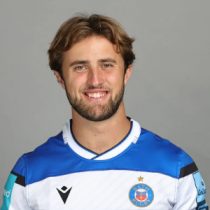 Born and bred in the city, the former Beechen Cliff pupil graduated to the Bath senior squad having progressed through the pathway over a five-year period, picking up valuable experiences on and off the field as a Bath Academy player and with the national age-grade teams with England.

Having spent time at Otley Rugby Club during the 2018/19 campaign whilst studying at the University of Leeds, de Glanville helped to guide England to a fifth-place finish in the World Rugby U20 Championship in Argentina, playing at both full-back and fly-half for England during the competition.

de Glanville is the son of former England captain Phil de Glanville who played 38 Test matches in the centres for England and was also represented Bath.

In July 2019, he committed his long-term future to Bath by signing his first senior contract.